Your cart is currently empty.

Friend recommended this preworkout, I AM IN LOVE. I can go for 2 hours no problem and I am hyper focused!

The El Jefe/Sicario LTD combo is the complete pre workout package. The additional beta alanine in the LTD really gets the ears itching crazy. I normally take 1.5 scoops of El Jefe and Sicario in order to get a full month out of the pre workout. I’ll be buying a few more of the Sicario LTD to stash before they run out. -Dylan

This shit is the real deal, although beware because it takes about 30 minutes for it to hit & when it does you can’t stop! I ended up staying at LA Fitness for 3 hours. I felt pure euphoria & determination!!!!!

If you are ready to take your workouts to the next level, this is the stuff for you. I have increased my strength while minimizing strain on the body.

This product is absolutely incredible! I have had great workouts because of it , felt focused, no stomach upset,felt good and very pumped throughout the workout and even after, and the taste is delicious. Phenomenal job!

This is hands down the pre workout out there!

My focus about 40 min after taking the pre was elite and I felt my arms were going to explode from the pump that I received. The effects are pretty delayed which could be a pro or a con to some. My daily pre.

I have been using this product for 2 months now I have lost 15 pounds. Caliente and Demonio are great together. The perfect shred stack!

This shirt is comfortable,stylish and represents a great supplement company!!🙌🔥💥

One scoop of El Jefe provided me with a great focus throughout my Saturday morning boxing class.

I’ve used many different on stimulant pre workouts , and this by far is one of the best . Pumps were nice , focus was nice , and surprisingly the endurance factor really kicked in more than I expected. Good overall product and I can’t wait for more limited batches like this!

This stack with caliente and demonio is the bomb 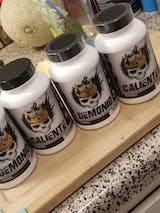 I tried the Jefe pre a year ago and instantly knew there was nothing like it I’ve ever had before. Recently I ordered the sicario and jefe to stack together... lemme fucking tell you. For only 200mg of caffeine per scoop I was focused af for 3 hours and made my workout my absolute bitch. I highly recommend this for anyone who wants to start taking lower dosage of caffeine for a better affect or even double scoop it to break a whole new barrier. Love it!

Sicario LTD Is great!! It’s delivers and taste great. It gave me some awesome pumps and the focus/mind muscle connection was on point. I highly recommend the whole line. Top shelf supplements!💪💀👑🚀

Just the right amount of everything

2nd best stim I’ve ever had.

I was excited about this Preworkout but the first time I took it I was not use to a low caffeine dose but it recommends you build your tolerance up to two scoops and my last Preworkout already helped me with that tolerance. I went in already 3 hours in my workout and I was not tired, which I usually have to fight off since my other preworkout made me crash hard, but instead my mind was so awake and focused, I do not believe I have put in so much effort to workout harder since before using El Jefe. It keeps your mind awake, I know I repeated that, but I found myself failing to lift up the lowest weight dumbbells', which meant my muscles were tired and fatigued, but I don't feel it which lets me go on for a couple of more hours.

P
SOLDADO PRE STACK P.B.
Still have not received it. The wait is killing me

Still have not received it. The wait is killing me

What are you looking for?

Some suggestions for you